In Balclutha, Pact organised a street party on September 27 to mark Mental Health Awareness Week. Called Street Jam, the aim was to raise awareness about local services and where people can go to get help, especially if they or someone they know is feeling low or suicidal. Event organiser, Link service coordinator and Careerforce Apprentice in Mental Health and Addiction Support, Tracey Currie, explains below. 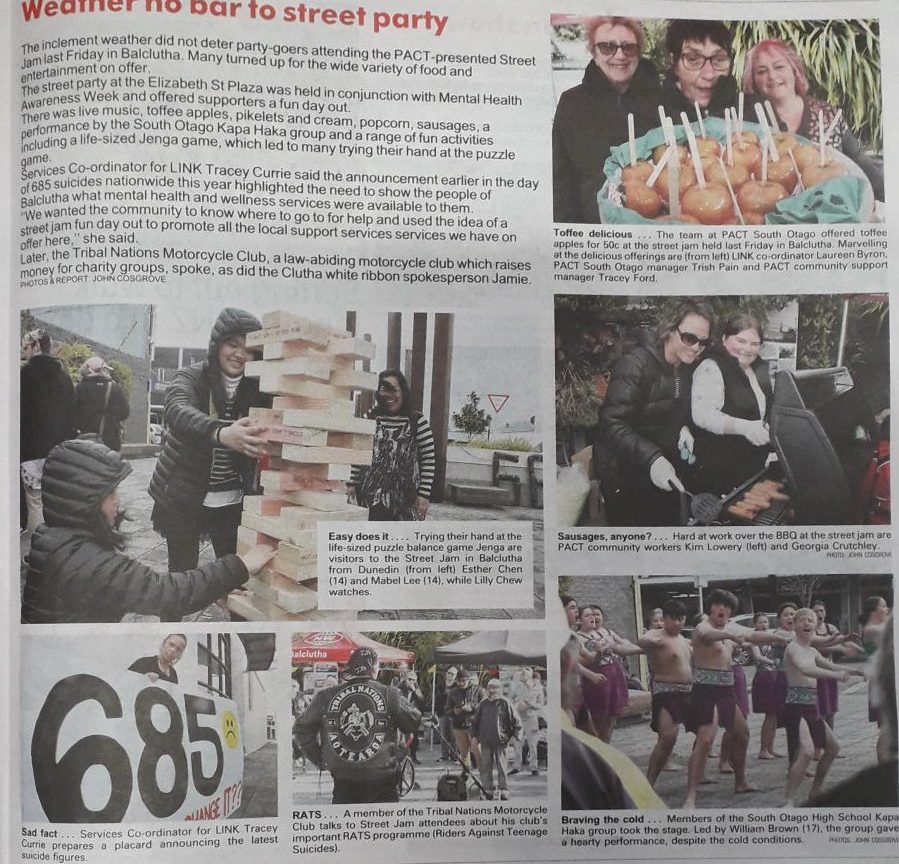 This year we arranged to close a small part of Elizabeth Street, which runs off the main street of Balclutha. At the time, I didn’t realise how much was involved in doing such a thing! But the good
old Balclutha spirit made it work! (A massive thanks to South Roads, the Clutha District Council and Traffic Management Control!)

Once we knew we could close the road, we organised live music, a sausage sizzle, pikelets, toffee apples and milkshakes, a chill-out area to sit and enjoy the atmosphere, kapa haka performances, a huge 3D number ”685” in the middle of the street (the number of people who died by suicide in the year to June 30) and an enormous sign asking “how can we change it?’’ There was an area where the community could write down their suicide-prevention ideas.

We had speakers including the head of Tribal Nations and the White Ribbon ambassador, and we had games and activities on the side. We had the smoothie bicycle, chocolate wheel, popcorn machine, giant Jenga, hunt for special stones and lollipops we made and had hidden everywhere, gymnastic ribbons and big bubbles to play with, and most importantly, information overload!

We had so many people in the community contribute to this event being a success, we could not have done it without them. And last, but not least, a lot of the Pact Balclutha staff put in a huge effort to make sure this event was successful and ran smoothly. It was just awesome!

Suicide is a difficult topic emotionally for a lot of people in the community, so I respectfully wanted the event to be colourful, fun and informative so people would feel comfortable putting forward
ideas about what they think will work to reduce the number of suicides.

The most awesome thing was to hear the feedback from the event. This was sent to me that night:

“E hoa, you don’t know how much your event hit close to home today for me. This time last week, 11 years ago, my brother committed suicide and every year since, it has been an ‘unspeakable subject’ in my family, until today. People like you and your staff are what we need to open up and talk about it freely, so thank you and your amazing team for today.”