A cohort of Kaimahi and Peer Support workers at DCM are set to upskill following a government initiative that has made significant training funding available to the sector.

The six support workers, some with lived experience, are about to embark on their own journey of learning with support from industry training organisation, Careerforce.

DCM (formerly Downtown Community Ministry) which recently celebrated its 50th birthday, provides services for vulnerable and marginalised men and women who are experiencing homelessness, or the threat of being homeless. Forty Kaimahi and Peer Workers and back office staff work across 3 main service contracts. 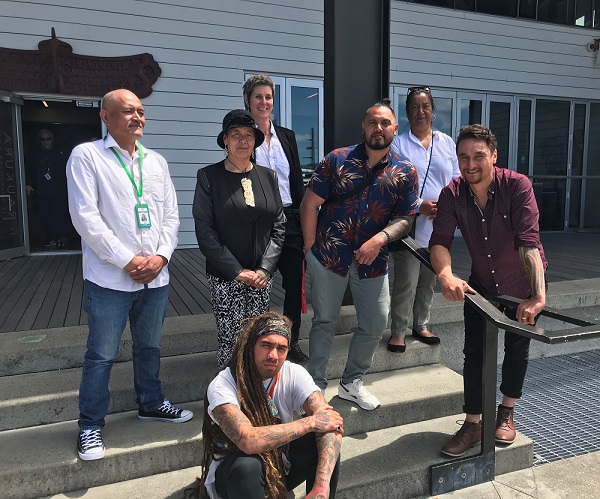 For Paula Lloyd, Aro Mai Housing First Team Lead, work with the street homeless population began in 1995 in central London.  Now she leads the team of Kaimahi and Peer Support workers in Wellington.

“We call the people we work with ‘taumai’, (meaning to settle),” says Paula. “This reflects the journey we embark on together to become settled, stable and well.  We work with taumai to find and sustain housing, access a benefit and manage their money, and to connect to whānau.”

Paula leads a diverse and committed team and supports them in being the best that they can be.

“I love working within a space that has such valuable purpose and that we can see change happening from the mahi that we provide. We have many obstacles to be creative around, but we also celebrate many successes.” says Paula.

“Some of our workers come from being our taumai once, and sometimes quite recently,” says Paula. “Although some staff come to us without prior qualifications, many have rich and valuable experiences.

“DCM is all about uplifting our people and it was our intention to develop these new Kaimahi and Peer Workers. However, as an NGO we have little funding to support ongoing development.”

An increase in government and council funding has resulted in a substantial increase in kaimahi at DCM.

In 2020 the government recognised the health and wellbeing sector as a priority sector, and the impact of Covid-19 on employers. In response, it launched the Targeted Training and Apprenticeships Fund (TTAF), and the Apprenticeship Boost Fund.

For some organisations such as DCM, the funded training and wage subsidy has helped to remove a key barrier to training. As a direct result of the government funding, a team of six support workers have been enrolled in the New Zealand Apprenticeship in Health & Wellbeing (Level 4) Social and Community Services.

“It’s great to now have the opportunity to enrol so many staff, that are a great mixture of both Kaimahi and Peer Workers, that can guide and support each other through this apprenticeship. Having this opportunity with Careerforce has been very exciting,” says Paula.

Jane Wenman, Chief Executive of Careerforce commented that “lack of funding is often a barrier to training across the health and wellbeing sector, and we have seen a strong lift in apprenticeship enrolments as a result of the new funding. There is also an increasing appreciation that apprenticeships are not just for the traditional trades.”

The apprenticeship is a well-supported training delivery approach that leads to the New Zealand Certificate in Health and Wellbeing (Level 4), and with a team of dedicated Apprenticeship Advisors providing pastoral care and support.

In her role, Paula supports her team, oversees service delivery, liaises with government agencies, and other stakeholders that enhance their work. The Peer Workers work alongside Kaimahi to enhance their supports and are a valuable part of our whānau.

“DCM has a commitment to uplifting taumai, and this is one pathway for doing this,” adds Paula. “The Kaimahi work with a caseload, but also work alongside any taumai that can present at the doors.  They all case manage a varied and broad range of services.  It’s a whatever it takes approach!”

Jay Marino is employed as a Kaimahi at DCM. “I enjoy helping people when they need it most, everyday getting to see the signs of humanity and humility,” says Jay.

Jay is one of the cohort of apprentices who have just enrolled in the New Zealand Apprenticeship in Community Facilitation.

“It’s my first time studying on the job for me, doesn’t feel overwhelming because the crew at Careerforce really look after you,” says Jay.

“Take this opportunity with both hands, or else your future might slip away between your fingers,” he adds.

DCM’s team of approximately 40 Kaimahi and Peer Workers and back office staff is funded by the people of Wellington, government agencies and Wellington City Council.  They work across three key areas of mahi: