Brownie Sadlier has recently received his very first certificate, confirming he has passed the level three hospital orderly certification. He is the first employee at Hauora Tairāwhiti to receive this qualification since the housekeepers, orderlies and security staff were brought in-house a year ago after these services being outsourced for 22 years.

Brownie has been an orderly at Hauora Tairāwhiti for over 17 years. He was a little apprehensive about going for his qualification at first, but Karren Marie Baines (hospital services manager) assured him that it was a great opportunity, especially if he wanted to work in other areas of the hospital. 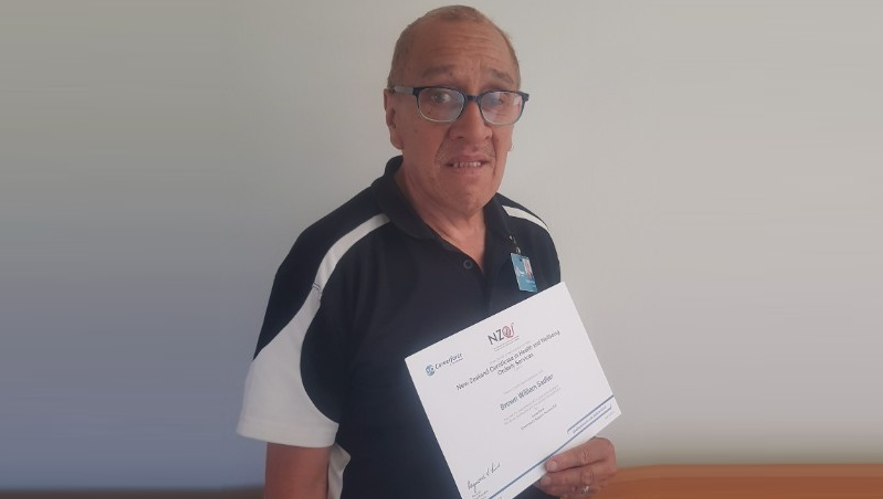 Getting this qualification means a lot to Brownie, “Now I have more opportunities and this certificate has lifted me up. I’m happy I did it because I haven’t really done anything like that before in my life, whenever I look at my certificate I feel so proud”.

Brownie may be the first to receive this qualification, but Karren would like to see the 19 other orderlies, housekeepers and security staff who don’t have their qualification to start working towards it. This online certificate is delivered through Careerforce and usually takes between three to twelve months to complete.

“These qualifications are nationally recognised and for some of them, it is the first qualification our staff have ever received, so it is a big deal,” said Karren. Hauora Tairāwhiti covers the cost of the online-distance learning courses and casual staff working in this area are able to gain these qualifications also.

The orderlies, security and housekeepers were brought in-house after the findings of the last staff engagement survey were released.  Karren has noticed a great difference with her team since the change. “It is good to have us all under the one umbrella so that we could be a whole team, rather than contracted team so we could feel a part of the Hauora Tairāwhiti whānau”.